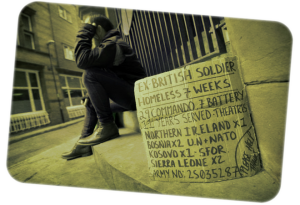 OK, so I found a protest song, apparently first published in 16291, a begging appeal from a crippled soldier and veteran of the Thirty Years War (1618-1648) that I’d rather like to write into the learning pack of our ‘Protest Song’ workshops.  Why? in the first place, because it’s arguably one of the very earliest anti-war songs in the English language, and therefore of very obvious historical significance. Secondly (and the photo on the right2 offers a clue here), because it exemplifies a specific and notable sub-genre of anti-war protest song, the lament or complaint of the returning soldier, often wounded or crippled, and cast aside by society (homeless soldiers scraping their living through begging on the streets is no recent phenomenon).  Sam Stone by John Prine, for instance, is a modern (Vietnam War-era) example of this sub-genre.

It’s too late now to present it in the weekly workshop programme itself; but I’m aiming to have turned the workshop documentation into a publishable book by the end of September. 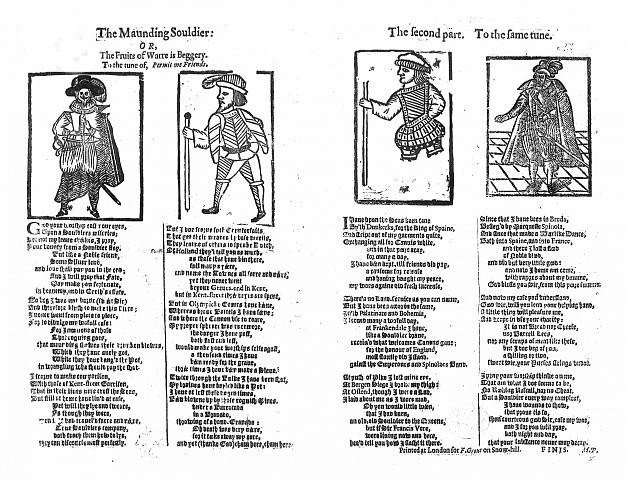 And what do I know of this song?  Its title: The Maunding Souldier: or, The Fruits of Warre is Beggery.  That it was published in 1629 by Francis Grove “to bee sold at his Shoppe, neere the Sarazens Head, upon Snovv-hill”. 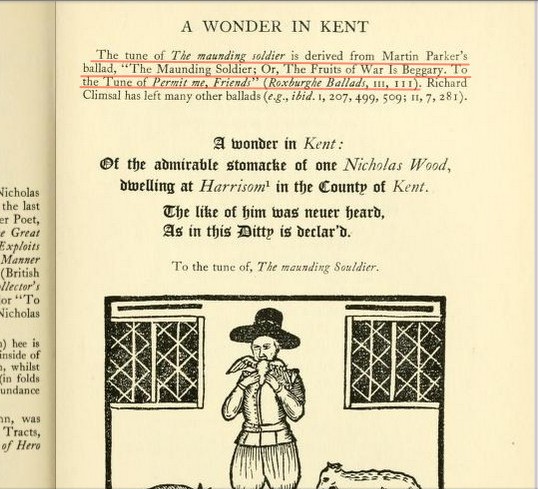 That it was written by a certain “M.P.” who appears to be the poet and ‘ballad-monger’ Martin Parker (1600-c1656), London tavern-keeper and royalist sympathiser whose ballads were much admired both by John Dryden and by Izaak Walton who included two of Parker’s songs in his Compleat Angler.  And that the ballad was sung “To the tune of Permit me friends“, while later ballads were (at least according to the text of Roxburghe Ballads, 1873, anthologised and edited by the prolific Charles Hindley, and to the text of the 1922 volume A Pepysian Garland : black-letter broadside ballads of the years 1595-1639, edited by Hyder Edward Rollins) were in turn sung to the tune of The Maunding Souldier (presumably, then, the same tune), though I’ve been unable to find any music score for the tune.

The lyrics here below:

The Maunding Souldier: or, The Fruits of Warre is Beggery, To the tune of Permit me friends.

Good, your worship, cast your eyes
Upon a Souldier’s miseries;
Let not my leane cheekes, I pray,
Your bounty from a Souldier stay,
but, like a Noble friend,
some Silver lend,
and Jove shall pay you in the end:
and I will pray that Fate
may make you fortunate
in heavenly, and in Earth’s, estate.

To beg I was not borne (sweet Sir)
And therefore blush to make this stirre;
I never went from place to place
For to divulge my wofull case:
for I am none of those
that roguing goes,
that, maunding, shewes their drunken blowes,
which they have onely got
while they have bang’d the pot
in wrangling who should pay the shot.

I scorne to make comparison
With those of Kent-street Garrison,
That in their lives nere crost the seas,
But still at home have lived at ease;
yet will they lye and sweare,
as though they were
men that had travel’d farre and neere;
true souldiers’ company
doth teach them how to lye:
they can discourse most perfectly.

But I doe scorne such counterfaits
That get their meanes by base deceits:
They learne of others to speake Dutch;
Of Holland they’l tell you as much
as those that have bin there
full many a yeere,
and name the townes all farre and neere;
yet they never went
beyond Graves-end in Kent,
but in Kent-street their dayes are spent.

In Olympicke games have beene,
Whereas brave battels I have seene;
And where the Cannon use to roare
My proper spheare was evermore:
the danger I have past,
both first and last,
would make your worship’s selfe agast;
a thousand times I have
been ready for the grave;
three times I have been made a Slave.

Twice through the bulke I have been shot;
My braines have boyled like a pot:
I have at lest these doozen times
Been blowne up by those roguish mines
under a barracado,
in a bravado,
throwing of a hand-grenado:
Oh death was very neere,
for it tooke away me eare,
and yet (thanke God) cham here, cham here.

I have uppon the Seas been tane
By th’ Dunkerks, for the King of Spaine,
And stript out of my garments quite,
Exchanging all for canvis white;
And in that poor aray
For many a day
I have been kept, till friends did pay
A ransome for release;
And having bought my peace,
My woes againe did fresh increase.

There’s no land-service as you can name
But I have been actor in the same;
In th’ Palatinate and Bohemia
I served many a wofull day;
At Frankendale I have,
Like a Souldier brave,
Receiv’d what welcomes canons gave;
For the honour of England
Most stoutly did I stand
‘Gainst the Emperour’s and Spinolae’s Band.

At push of Pike I lost mine eye;
At Bergen Siege I broke my thigh;
At Ostend, though I were a lad,
I laid about me as I were mad.
Oh you would little ween
That I had been
An old, old souldier to the Queene;
But if Sir Francis Vere
Were living now and here,
Hee’d tell you how I slasht it there.

Since that, I have been in Breda
Besieg’d by Marquesse Spinola;
And since that made a warlike dance
Both into Spaine, and into France;
And there I lost a flood
Of Noble blood,
And did but very little good:
And now I home am come,
With ragges about my bumme,
God bless you, Sir, from this poore summe!

And now my case you understand,
Good Sir, will you lend your helping hand,
A little thing will pleasure me,
And keepe in use your charity:
It is not bread nor cheese,
Nor barrell lees,
Nor any scraps of meat, like these;
But I doe beg of you
A shilling or two,
Sweet Sir, your purse’s strings undoe.

I pray your worship, thinke on me,
That am what I doe seeme to be,
No rooking rascall, nor no cheat,
But a Souldier every way compleat;
I have wounds to show
That prove ’tis so;
Then, courteous good Sir, ease my woe;
And I for you will pray
Both night and day
That your substance never may decay.