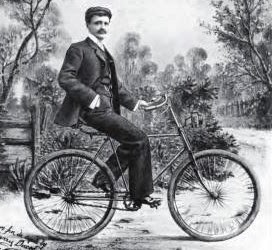 There are some songs that, for one reason or another, over the years garner an historical and cultural significance that extends way beyond the song itself. One such song is Daisy Bell by Harry Dacre (pictured left, on his bicycle), pen-name of Frank Dean (1857–1922), a prolific songwriter (he claimed to have sold some 600 songs in the first two years of his career) from the Isle of Man.

After some success in the UK from 1885, and then in Australia, Dacre set off for New York in 1891, taking with him an early draft of the song Daisy Bell, and a bicycle on which he had to pay import duty. Musicologist and music historian David Ewen writes in American Popular Songs (1973):

When Dacre, an English popular composer, first came to the United States, he brought with him a bicycle, for which he was charged duty. His friend (the songwriter William Jerome) remarked lightly: ‘It’s lucky you didn’t bring a bicycle built for two, otherwise you’d have to pay double duty.’ Dacre was so taken with the phrase ‘bicycle built for two’ that he decided to use it in a song.1

While in New York, he persuaded English music-hall star Katie Lawrence (1868-1913), then appearing at Tony Pastor’s theatre, to perform the song when she returned in London at the end of the year.2 The song was soon to become popular in London music halls, and then a worldwide hit.

That it was to become a worldwide hit would be due not only to sales of the sheet music internationally but also to the still fairly novel but now commercially successful technology of sound recording.  Although originally recorded and released by the popular American singer and early recording artist Dan W. Quinn (1860-1938) in 1893, the earliest known surviving recording of the song is on a 1894 wax cylinder by Edward M Favor, an American vaudeville comedian, singer, musical theatre performer and pioneer recording artist, and one of the most popular stars of the late nineteenth and early twentieth centuries in his native USA. 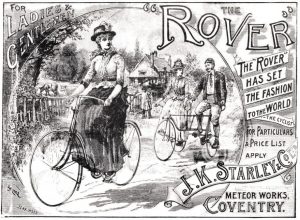 But perhaps the bicycle itself–or more specifically the bicycle craze of the late 1880s and 1890s–had much to do with the success of the song?  For if any technology stands out for the sheer breadth of its impact on late 19th century society—on travel, on leisure, on politics, on fashion, and even on the emancipation of women—it is surely the bicycle.

It was John Kemp Starley’s invention of the ‘Rover Safety Bicycle’ in England in 1885 and the Coventry Machinists Company’s ‘Swift Safety Bicycle’ of the following year—with their pneumatic tyres, modern diamond shaped frame, and equal sized wheels—that provided the catalyst for cycling’s Golden Age, the cumbersome and often dangerous designs of the past finally replaced by a safe design suited for the first time to all levels of rider skills.

And while cars, gramophones, the home telephone, and later air flight, were very much limited to the wealthier classes, significantly the ‘Safety Bicycle’ was economically viable for many middle class and working class enthusiasts (in other words, for the majority of the population).

‘Rational Dress’, the bicycle, and the emancipation of women 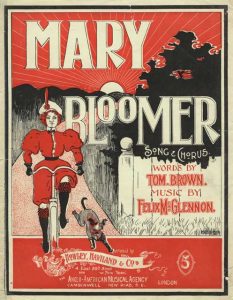 The ‘Safety’ bicycle was also the first bicycle that was truly suitable for women, though those early pioneering ladies had to endure great public outrage. The social lives of most young women in the late 19th century were strictly supervised, particularly those of the middle and upper classes whose relative affluence also placed them in the best position to enjoy the new sport of cycling.

The bicycle offered women freedom from the constraints of their daily lives, a freedom that was not universally approved but which was reluctantly accepted as cycling gained in popularity among women. Even so, their numbers greatly increased and cycling became an important expression in the battle for women’s emancipation. For the safety bicycle gave women unprecedented mobility; and as feminists and suffragists recognised its transformative power as more women now had access to the personal freedom that the bicycle embodied, so the bicycle came to symbolise—especially in Britain and the United States—the New Woman of the late nineteenth century. 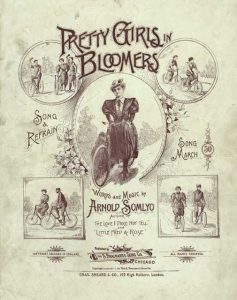 Since women could not cycle in the then-current fashions for voluminous and restrictive dresses, the bicycle craze fed into a movement for so-called ‘rational dress’, which helped liberate women from their corsets and ankle-length skirts and other encumbering garments, substituting for these the then-shocking ‘bloomers’.

The ‘Rational Dress’ movement had not originally been linked to cycling but was rather a reaction again the mainstream women’s fashion of the mid 1800s, the uncomfortable and impractical voluminous skirts over constricting tight corsets.

In 1851 Libby Miller (1822–1911), a New England activist, designed trousers to be worn under a short skirt that permitted more movement. But the outfit, dubbed ‘bloomers’ after being publicised by Miller’s colleague Amelia Bloomer (1818–1894), attracted ridicule – particularly in England – and the dress reform movement stalled.

In 1881, the Society for Rational Dress was formed in London. The Society’s president and co-founder, Lady Florence Harberton, was herself a keen cyclist and an advocate of exercise for women. Recognizing the restrictive nature of women’s clothes she advocated the wearing of a divided skirt over a pair of bloomers or other under-trousers. 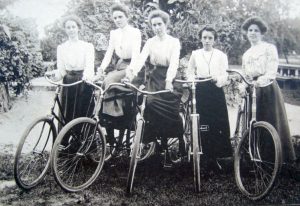 Thus thanks to lighter or divided skirts, women participated fully in the cycling boom that followed the invention of the Rover Safety Bicycle of 1885.

Rational dress as a fashion was finally adopted in 1895 by a handful of socially privileged women, arguably setting the foundation for women’s trousers to become fashionable in the 20th century.

One of those socially privileged women, and a keen cyclist, was Daisy Greville.  But that is a matter for our next chapter of the story.

The Clarion Cycling Club and the spread of Socialism 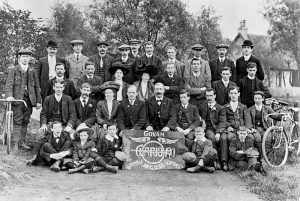 The affordability of the bicycle made it unexpectedly a vehicle (in every sense) for the spread of socialism. The Socialists’ Cycling Club was launched in Birmingham in February 1894, coinciding as it happened with the first sound recording of Daisy Bell on wax cylinder, as detailed at the beginning of this essay. Subsequently renamed the Clarion Cycling Club after The Clarion socialist newspaper, it not only offered healthy exercise for young Socialists; the so-called “Clarion Scouts” used their cycling trips to circulate socialist leaflets and copies of The Clarion wherever they visited. By the end of 1894, 22 of the Bradford Clarion Cycling Club’s 25 members were working as Scouts, distributing socialist literature to villages around the town. In March 1895 a new socialist magazine, The Scout, was launched for Scouts to read and to circulate. It was subtitled A Monthly Journal for Socialists and its first edition included a set of ‘Instructions for Scouts’ written by The Clarion‘s editor Robert Blatchford (1851-1943). The Clarion Clubs also did much to circulate The Clarion, copies of Blatchford’s book Merrie England, and thus the socialist ideas that they expressed. 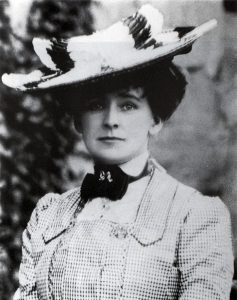 And this is where we are brought unexpectedly and bizarrely back to the song Daisy Bell for which a real-life Daisy is said to have been the inspiration. Daisy Greville, the Countess of Warwick, was one of the wealthiest and most desirable English women of the period. In her lifetime, became a vegetarian, a suffragist, championed women’s education, became an ardent supporter of trade unionism, and was at one point mistress of the Prince of Wales, later Edward VII.  But that she inspired the writing of the song is to be attributed to the fact that Daisy was also an enthusiastic cyclist, identified by Cycling magazine as “among the first ladies who caught that rabid disease commonly known as cyclomania”. 3  (Her lover Edward, Prince of Wales, was incidentally also a keen cyclist, even featuring in an advertisement for Humber Cycles.)

Daisy also took a particular interest in socialism following a confrontation with Robert Blatchford, aforementioned editor of The Clarion and inspiration for the Clarion Cycling Clubs. In 1904, she joined the Social Democratic Federation, opposed the 1914-8 Great War as a Capitalist imposition, supported the 1917 October Revolution in Russia, and after the War became a member of the Independent Labour Party, standing as Independent Labour Party candidate in 1923 for the Warwick and Leamington constituency against Conservative candidate Anthony Eden.

Owning a bicycle benefited the love lives of those living in urban communities. Young men in particular visited towns and villages that normally they would never have thought possible. Birth records have shown that family names previously only seen in a particular area suddenly started to appear much further from home. Obviously many long cycle rides were made with amorous intentions!

The link between cycling and romance, first captured in Harry Dacre’s 1892 hit Daisy Bell with its famous ‘bicycle made for two’, would be recognised and reprised in later songs such as John Crook and Fred Bowyer’s 1895 hit song, A Bicycle Marriage, penned for Lottie Collins. The 1890s also saw ‘cycling courtships’ becoming increasingly common among members of the middle-classes, as young men and women used bicycle rides as opportunities for unsupervised and unchaperoned meetings. As one female cyclist described,

The chief merit of the bicycle in the eyes of the young is that is dispenses with the chaperon. It imparts open air freedom and freshness to a life heretofore cribbed, crabbed, cabined and confined by convention. The cyclists have collided with the unamiable Mrs Grundy and have ridden triumphantly over her prostrate body.

“My instructor was Mr. Langley, and he taught me to sing a song. If you’d like to hear it I can sing it for you…” 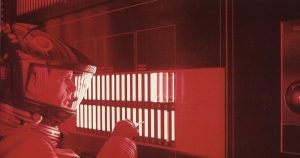 The final chapter in our story of the song takes us onwards to 1968 and to a film that I’m sure everyone now knows, Stanley Kubrick’s epic 2001 A Space Odyssey, towards the end of which HAL, the computer that controls the network of systems of the Discovery One spacecraft and interacts with the ship’s astronaut crew, malfunctions and has to be shut down by the last living crew member, Dave Bowman.

After first trying to reason with Bowman, then pleading with Bowman, HAL in its final moments is dismantled back to an earlier and safer state in which he tells how he was taught a song by his ‘instructor’, Mr Langley, and offers to sing it to Bowman.  “Yes, I’d like to hear it, HAL.  Sing it for me.”  And HAL then proceeds to sing Daisy Bell.

But ‘Mr Langley’ in fact is a fictional echo of the NASA’s Langley Research Center in Hampton, Virginia, where the IBM 7090 that had calculated the trajectories for the Mercury and Gemini space flights was interestingly also the first computer to be used for the composition of computer-generated music.  Two albums of Music from Mathematics were released on the Decca label, on the second of which, presenting eighteen performances by the IBM 7094 recorded in 1961 at the Bell Telephone Laboratories in Murray Hill, New Jersey, the opening track was Daisy Bell.

But this is not quite the end of our story. In 1985, Christopher C. Capon created a Commodore 64 program named ‘Sing Song Serenade’, which caused the Commodore 1541 floppy disk drive to emit the tune of Daisy Bell directly from its hardware by rapidly moving the read/write head.  And this curiously takes us all the way back to 1893 and to Edward M Favor who, prior to recording Daisy Bell, recorded a song entitled … wait for it … The Commodore Song.  Amazed? you should be.

2 thoughts on “Daisy Bell, a countess, a computer, and a curious life of a song”