Yesterday late afternoon, following six weeks of workshops and last Friday a banner-making workshop, we had our first rehearsal in Brompton Cemetery for our processional performance on 21st June of Rise Up, Women! commemorating the centenary of partial suffrage for women with the successful passage through Parliament of the 1918 Representation of the People Act.

We’ve now plotted a route along the central avenue, starting from the grave of Emmeline Pankhurst close to North Lodge and running down to the Chapel, with a repertoire of four key songs of the women’s suffrage movement to be sung along the way. 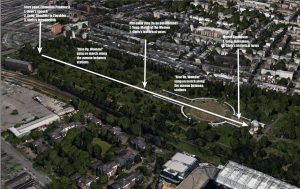 The final two songs in the procession will be March of the Women which was to become the de facto anthem of Emmeline Pankhurst’s Women’s Social and Political Union when composer Ethel Smyth joined the WSPU in 1910, and Jerusalem which the leading suffragist Millicent Fawcett made the “Women Voters’ Hymn” for her National Union of Women’s Suffrage Societies and which was subsequently to be espoused as the anthem of the Women’s Institute.

Complex histories have an irritating tendency to refashion themselves over time as simplifying myths, and in so doing can shuffle around the actors in ways that may highlight the more theatrical players at the expense of others.  We’ve therefore been delighted to see that Millicent Fawcett, who worked concertedly with parliamentarians over many years to secure the vote for women, has been given due recognition as the first statue of an outstanding woman among a rabble of men in Parliament Square.