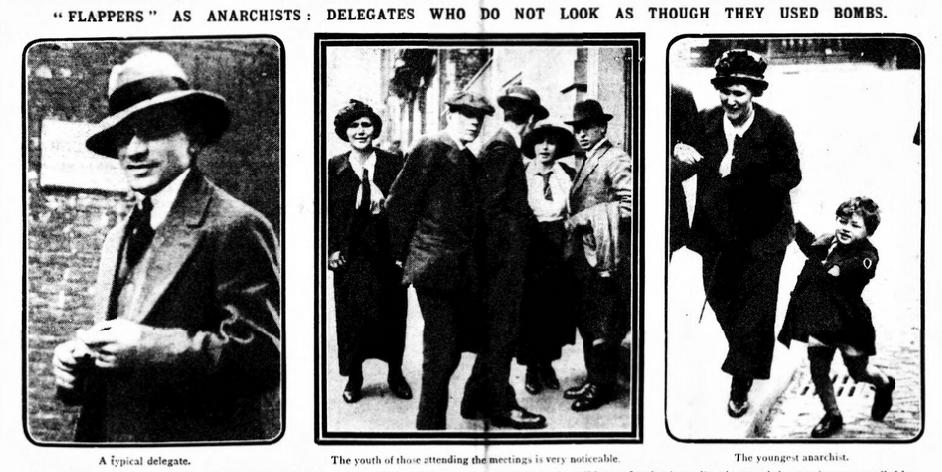 I must thank the blogger of History is Made at Night for his recent post ‘Flappers as Anarchists’ – sharp dressed radicals in Newcastle, 1914.  While I knew the word ‘flapper’ had an origin and usage older than its familiar use and meaning in the 1920s, I’d been unaware it was common parlance in the 1910s such that it would have been understood in the Daily Mirror report below:

‘Anarchists are in conference at Newcastle-on-Tyne. The statement sounds very terrible and smacks of bombs and desperate deeds against society, but the delegates are in reality the mildest people imaginable. There are between thirty and forty of them, including three girls in the “flapper” stage. They dress like respectable Unionists or Liberals’
Daily Mirror, 14 April 1914

So I had to look up the term in Wikipedia:

By the 1890s, the word “flapper” was emerging in England as popular slang both for a very young prostitute, and in a more general – and less derogatory sense – of any lively mid-teenage girl …
By 1908, newspapers as serious as The Times used it, although with careful explanation: “A ‘flapper’, we may explain, is a young lady who has not yet been promoted to long frocks and the wearing of her hair ‘up'”.
https://en.wikipedia.org/wiki/Flapper#Etymology

and it is clear the latter sense that is intended in the Daily Mirror report and that prefigures its usage in the 1920s.