Although the story of popular music in Britain is fragmentarily documented, and much music catalogued, in a few UK memory institutions (the Victoria & Albert Museum, the British Library Sound Archive, the Imperial War Museum, the British Music Experience) little space is given to popular music prior to the Jazz Age and almost no attention is paid to the determinative role of music in the shaping of the mainstream social history of Britain, tending to more narrowly focus instead on the history of popular music in its own right, as a derivative cultural expression of an era rather than as an active agent in the very making of history. 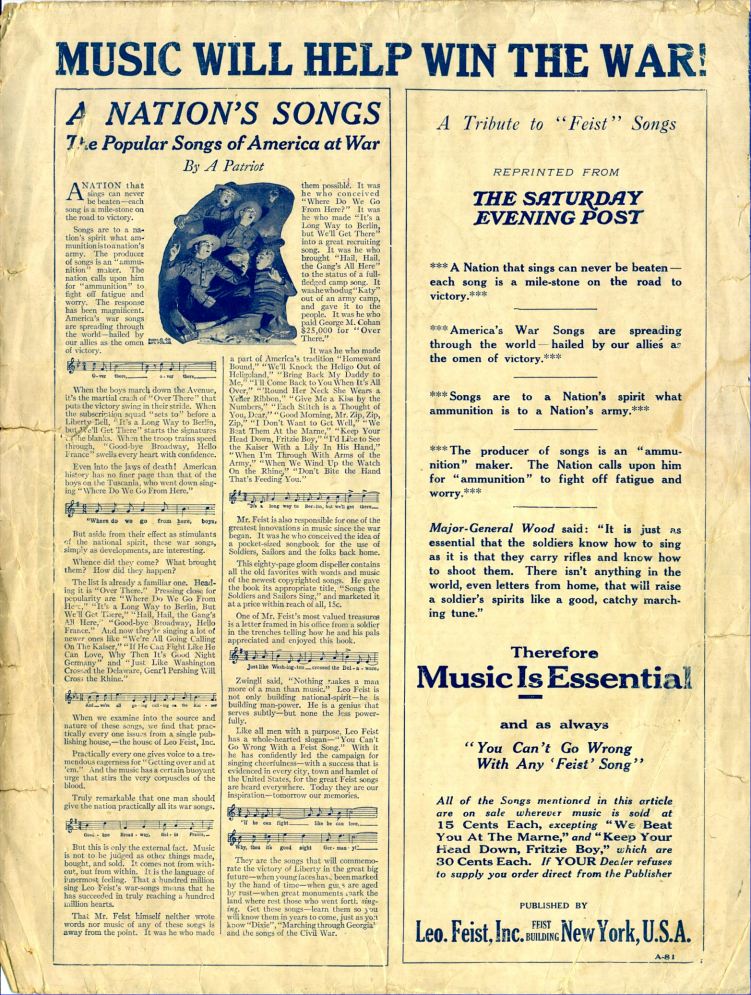 Yet, far more than mere entertainment, popular music played a significant part both in engineering public perceptions of and attitudes towards the Great War and also in charting social change during and in the immediate aftermath of the war: as propaganda (for and against) and consensus-building, as reportage, as social and political commentary, and as a mirror to important social transformations.

The comparative neglect of this important heritage therefore seems extraordinary, all the more so in so far as, given the relative paucity of contemporaneous writings on popular culture in this period [1], the popular music of the day constitutes an invaluable documentary resource for social historians. In this spirit, James Nott, in his Music for the People (2002), stresses that to reach a full understanding of British history in the 20th century it is ever bit as important to examine the impact of the daily cultural experiences of the majority population as it is to study political events.

Outside of the museum and heritage sector, individual scholars and music enthusiasts have privately published on the music of the First World War years, and in many cases have uploaded to the Internet both recordings and sheet music in, for example, their personal blogs or minimally annotated recordings on YouTube [2]. And yet locating the myriad documents—even for a single song—demands much time-consuming keyword web search with no metric for assessing, prior to clicking a link, the quality of resources thus discovered, and generally little or no structured interlinking of resources. (See Appendix VII for an illustration of multiple heterogeneous sources.) In short, there exists no single searchable repository in Britain of the popular music and music scholarship for the period.

This is in significant respects, therefore, an unconventional heritage project: in the first place, rather than it being based on an existing well-defined collection we shall instead be seeking items in both original and digital format from heterogeneous sources (see Section 2: Sourcing content), and therefore the size of the collection is a priori unquantifiable at the start of the project; in the second place, the primary project goal will be the creation of an open access library of digital reproductions rather than the conservation of originals.

In seeking to build a comprehensive digital library of recordings, sheet music, piano rolls, scholarly publications, and quality web resources, the aim of the project outlined in this paper is (to paraphrase Article 03-3/1 of the ICOM statutes[3]) ‘to acquire, conserve, research, communicate and exhibit the popular music of the First World War for the purposes of education, study and enjoyment’; but, beyond that, to mainstream popular song as serious history.

“A Nation that sings can never be beaten—each song is a milestone on the road to victory. Songs are to a nation’s spirit what ammunition is to a nation’s army” [4]. Popular music was not an incidental ‘soundtrack’ to the Great War but was itself an active agent of social and political commentary and change before, during, and following the War, and is consequently in its own right a significant historical and cultural phenomenon meriting serious study [5].

Writing on the use of popular music as propaganda “for the waging of a war in which causalities would reach unimaginable heights”, cultural historian John Mullen argues that

this form of propaganda through song was essential to the successful construction of a patriotic consensus, in particular because it could speak to a mass audience who were often wary of declarations coming directly from the moneyed classes[6].

Across a broad geography, a popular slogan of the war, apocryphally attributed to President Woodrow Wilson, was that “Music is essential to win the war”, so potent an idea that it would be echoed twelve years later in the title of a Daily Express songbook Songs That Won The War. US Army General John Joseph ‘Black Jack’ Pershing (1860-1948) declared that “Music is as necessary to the boys as sleep and food”, while music publisher Leo. Feist, Inc. printed a long message about the role of music in the war on the back of sheet music under the heading “Music Will Win The War”.[7]

Yet popular music in the Britain of the Great War period is under-represented in UK museum collections and research archives. Among the more notable are:

The UK boasts nothing to match the repositories at Indiana University,[14] Brown University,[15] UC Santa Barbara,[16] Library and Archives Canada,[17] UC Los Angeles,[18] or the Library of Congress,[19] and elsewhere in the USA, Canada, and Australia. Indeed, more recordings of popular music in the Britain of the war years are publicly accessible, uncatalogued, on YouTube than in any British institutional collection.

Promoting a knowledge and understanding of how popular song was used as patriotic propaganda, as consensus building, as reportage and documentary, and as a mirror to social transformation, the purpose of the project outlined in this proposal is therefore:

This final point cannot be overstressed: we see active participant / volunteer engagement as absolutely crucial to the project’s long-term sustainability and further development: we count, as a measure of the project’s success, that the young participants ‘take ownership’ of the content not as ‘that heritage’ but as truly ‘Our Heritage’. To that end, we intend to incentivise and reward student volunteers with ‘Badges’ (through the Mozilla Open Badges framework)1 in recognition of the (e-)heritage skills they will have acquired during the course of the project.

A note on copyright

All of the sound recordings and sheet music in the digital library will date from 1912 to 1920, with performers’ rights expiring in around 1970 at the latest, and might therefore by default be presumed to now in most cases be in the public domain. However, since we propose to collect and curate already digitalised items from a variety of sources, an experienced copyright consultant will of necessity be a key member of the team.

We propose to attach copyright information to each song title in the digital repository database, flagging those where restrictions may still apply. This will be the first publicly accessible project to systematically do so.

Next section: The Heritage