The heritage at the core of this project falls into two categories:

Although one of the desirable outcomes both for heritage and for people would be to acquire original sheet music, piano rolls, and 78rpm records, this is not a primary aim of the project, and the conservation and restoration of original items is not part of the current project: a digital library of both recordings and sheet music is preferred as the optimal platform for giving broad on-demand access to the heritage.[22]

We shall be collecting recordings and sheet music of music hall songs, musical theatre, marching songs and ‘soldiers’ songs’, songs of dissent and anti-war songs, complemented by rich documentation relating to music publication and enabling technologies.

Criteria for selection / inclusion of songs

The criteria for selection of songs to include in the project are that:

Items to be included in the library will be sourced from:

Very importantly, we expect to demystify and ‘democratise’, for our school participants and volunteers, the business of preserving our national heritage by demonstrating that the methods of collecting lie within the capacities of every one of us.

With his recordings of songs such as When the War Is Over Mother Dear (1915), There’s a Long Long Trail (1916), and (as Eric Courtland, one of many pseudonyms) Take me Back to Dear Old Blighty (1917), popular tenor Ernest Pike established himself as one of the foremost singers of the war years. Phyllis Dare, Edna Thornton, and many other popular singers recorded war songs. Some professional singers such as Derek Oldham enlisted in the armed forces, Oldham himself forming the Yellow Perils Concert Party of amateurs with whom he produced many musical shows including The Chocolate Soldier.

“No history of British music hall during the Great War has yet been written”, observes John Mullen.[25] Yet, reviewing Peter Bailey’s Music Hall: The Business of Pleasure (1986), Ellis et al (1987) draw attention to the fact that the history of music hall is centre-stage of “urban history … economic history, cultural history, architectural history, even labour history”. The music halls in London were used to stage charity events in aid of the war effort.

The army recruited in music halls and the popular music hall artistes of the time worked enthusiastically to support the recruitment effort.[26] George Robey, for example, was known for his enthusiastic participation in recruitment drives for the army; and in one theatre promised “a shiny florin for every recruit who signs on tonight”. 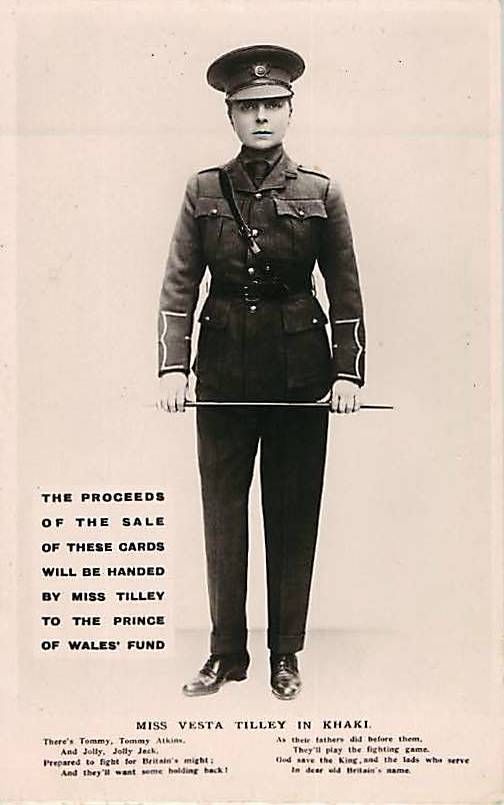 Harry Lauder toured the music halls with a military band, recruiting young soldiers on stage in front of the audience, often offering ‘ten pounds for the first recruit tonight’. George Formby Sr was active in the recruiting campaign, and spoke at recruitment rallies.[27] Edith Bracewell donned a recruiting sergeant’s cap and walked among the audience picking out likely recruits.[28] Orchestrating a military recruitment drive with her husband, popular singer Vesta Tilley (pictured right), performing songs such as Your King and Country Want You (1914), In Dear Old England’s Name (1914), Jolly Good Luck to the Girl who Loves a Soldier and The Army of Today’s Alright[29], became known as “England’s Finest Recruiting Sergeant”. The full list of music hall stars involved in recruiting is too extensive to include here; the above represents an indicative sample.

‘Trench songs’, ‘estaminet songs’, ‘marching songs’, or more generically ‘soldiers’ songs’, composed and sung by serving soldiers, sailors, and airmen, constitute a rich oral tradition, the songs enduring to the present day. Sung largely to sustain morale, It’s a Long Way to Tipperary and Pack All Your Troubles (In Your Old Kit Bag) were popular marching songs.[30] Other than the more well-known exempla such as When This Lousy War Is Over, Hanging on the Old Barbed Wire,[31] and Mademoiselle from Armentières, some mainstream songs also were to have their roots in the ‘soldiers’ songs’; for example, Bless ‘Em All, credited to have been written by Fred Godfrey in 1917, was a sanitised version of Fuck ‘Em All (c.1916) which Godfrey may first have heard while serving with the Royal Naval Air Service.[32] John Brophy, in The Long Trail: Soldiers’ Songs and Slang 1914-1918, identifies seven categories of soldiers’ songs.

In the absence of any significant anti-war sentiment or popular opposition to the war,[33] anti-war songs were rare in Britain (though common in the USA, e.g. I didn’t raise my boy to be a soldier). The Military Representative (1916) exposed the stupidity of conscription tribunals (“I’m very sorry gentleman But my poor husband is dead … the military representative got up and shouted Hi!! How dare your husband die! … you just let him know I’m sending a Sergeant to fetch him back For of course he’s got to go!”); The Conscientious Objector’s Lament (1917), a humorous song intended to ridicule conscientious objectors, was ironically taken up with perhaps sympathetic enthusiasm by active servicemen;[34] War Office Cuthbert (1918) sardonically compared the life of the white collar war worker at home with that of the soldier at the Front. Songs from the later years of the war such I Don’t Want To Be A Soldier, Take me back to dear old Blighty, Oh It’s a Lovely War (1917), and I want to go home may have seemed mildly rebellious, but in general the songs of dissent were more critical of the way in which the war was conducted than of the war itself. Notable exceptions, however, were several songs from Ireland, including The Recruiting Sergeant, Teddy McGrath, The Kerry Recruit, and Glen of Aherlow. The first, at least, of these was “branded a ‘treason’ song by the British and anyone heard singing it in public rendered himself liable to six months’ imprisonment”.[35]

Many popular songs towards the end of the war reflected on social changes brought about as a consequence of the war. You Better Be Nice To Them Now (1918), for example, with its message to returning servicemen that “Your job isn’t safe any more” because “Girls are filling men’s positions nowadays / And making good at everything they try”, and Vesta Tilley’s Where Are The Girls Of The Old Brigade? (1917) in which “The barmaid I used to flirt and frivol with / She’s an ammunitions maker I hear/ Quite a lady since the war for the wages she can draw”, not only signalled the new economic independence of women working during the conflict in what had traditionally been men’s jobs but thus also fueled fear of male unemployment. How ‘Ya Gonna Keep ‘Em Down on the Farm? (After They’ve Seen Paree)? (1918), recorded by music-hall star Harry Fay, highlights the difficulty faced by many servicemen in returning to their pre-war lives.