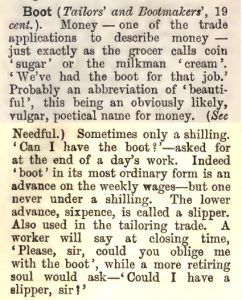 Today we should like, for your edification and enjoyment, to share a few interesting words and phrases with you.

Do a Dutch
To remove one’s furnishings from a property and leave the premises without paying the due rent.

Lally-gagging
Flirting, behaving in a coquettish manner towards the opposite sex. 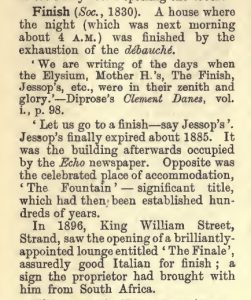 Finish
A house where men of a certain disposition would finish their night of drunken debauchery.

Nose bagger
Someone who brings his own provisions on excursions (generally to a beach resort) and doesn’t contribute at all to the resort he’s visiting.

Alexandra Limp
An affected manner of walking seen in many women for several years and attributed to the then Princess of Wales who had had some trouble with a knee.

Mafficking
Getting rowdy in the streets.

Fly-rink
An 1875 term for a polished bald head.

And “my old Dutch”? from Wikipedia:

The song’s title refers to an 1880s colloquialism for a partner or friend. The phrase has a number of etymologies; two Cockney rhyming slang explanations identify the phrase as coming from “dutch plate” (“mate”) or “Duchess of Fife” (“wife”). Chevalier, however, claimed that his wife’s face reminded him of the clock face of a Dutch clock.

Badcock, J. (writing under the pseudonym of ‘Jon Bee’)  (1823).  Slang: A Dictionary of the Turf, the Ring, the Chase, the pit, of Bob-ton, and the Varieties of Life.  London: T. Hughes.
» https://play.google.com/store/books/details/John_Badcock_Slang_a_Dictionary_of_the_Turf_the_Ri?id=HfUSAAAAIAAJ

2 thoughts on “My Old Dutch, and all that: a brief look at Victorian slang”