Something a bit different from Radio Days today, and perhaps still topical in its way. Not a song but a short British Movietone clip featuring crime writer and author of the Fu Manchu series, Sax Rohmer (nom de plume of novelist Arthur Henry Sarsfield Ward, 1883-1959), speaking in 1932 about what he perceives to be the rise of crime in Britain: “What with motor car hold ups, snatch and grab raids, its country house burglaries and other forms of sport, Merrie England is becoming merry England indeed.” 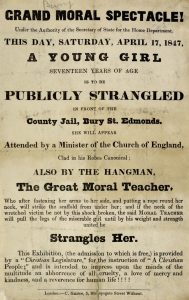 Was there any less crime in Britain prior to the 1930s?  I suspect not, and a browse through 19th century broadsides (see poster, right, for example)1, ballad sheets, and through publications such as the Police Gazette would seem to confirm that suspicion.  Perhaps that, with the flourishing of the tabloid press, crime in the UK was simply becoming more visible? or perhaps technology (e.g. the motor car) might have facilitated crimes (such country house burglaries) less likely in times of lesser mobility?

But I also wonder whether the clue might lie in the final words of the sentence quoted above.  I’ve written extensively elsewhere about the centuries-old idea of a ‘Merrie England’, a yearning for an idyllic past of the imagination, a false nostalgia for an England that never existed.  Rohmer is speaking at a tumultuous moment in history: the world is still reeling from the Wall Street crash and the Great Depression, Mussolini and Hitler are surging to power in Italy and Germany, while in that very year of 1932 Oswald Mosley has just launched the British Union of Fascists. Enough perhaps to bring out the “Back in the good old days when I was a nipper …” sentiment in all of us.