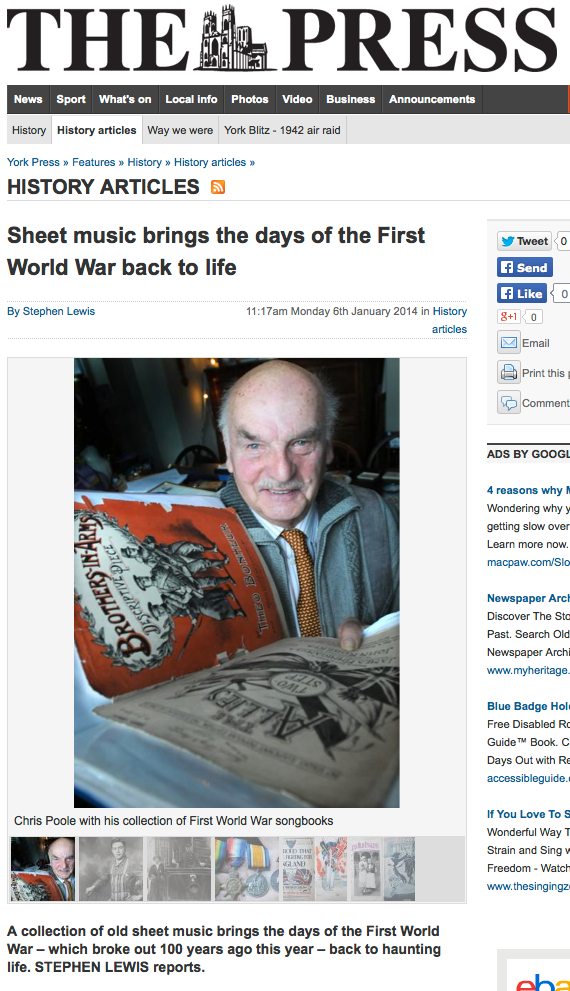 This is exactly the kind of collector we should love to meet!  And how good it would be to have permission to make digital copies of his collection.

CHRIS Poole has the sort of voice – light, jaunty, musical – that could have been honed on the music hall stage. As he leafs through his collection of First World War sheet music, the 86-year-old can’t help bursting into song.

“Take me back to dear old Blighty”, he sings, pausing at a sheet of music for the song of that name. As sung by Miss Daisy Dormer, the cover explains.

The paper is browned by age, but, listening to Chris, you can still imagine how the young Tommies, stuck in their squalid trenches, would have dreamed of home, and of the smiling young woman pictured on the front cover.

He pauses at a sheet of music for a song entitled: “What did you do in the Great War, Daddy?” The cover is illustrated with fine ink drawings.

In the background, a Tommy stumbles across a battlefield, a wounded colleague slung across his shoulders. In the foreground, a returned soldier sits on a straight-backed chair, while his young son clings to his leg and looks up at him with an expression of hero worship. The left sleeve of the man’s jacket is empty and pinned up: clearly he lost a limb in the war.

Chris was born in 1927, nine years after the war’s end, and raised in Heworth.

“When we were kids there were lots and lots of people like that,” he says, indicating the drawings. He means men who had returned, shattered, from the war: missing limbs, walking with the aid of sticks, breathing in wheezing gasps as a result of being gassed, or still shellshocked years later.

Chris and his wife Margaret, who live in the Stockton Lane area, have been collecting old sheet music for years. They have albums full of hundreds and hundreds of original songsheets, many of them old wartime songs dating back to long-ago conflicts such as the Boer War and even the Franco-Prussian War.

The First World War songs have a special meaning for Chris, partly because he can remember singing so many of the songs at school in Heworth, and partly because of his own connection to that war.

He lost two uncles: Thomas Poole, killed in October 1914 just a couple of months after hostilities broke out; and Harry Poole, killed just over a year later in December, 1915. Chris’s father, Walter – Harry and Thomas’s brother – was himself injured at the Battle of Mons in 1914.

Walter was a sergeant in the Army Service Corps, supplying food and other rations to troops in the front line. He was badly hurt in the chaos of the retreat at Mons, says Chris. “The men got run over by horses and carriages. He broke his ribs.”

Walter, a butcher by trade, was sent home to convalesce, ending up in an Army hospital in Fulford Road, York.

As he began to recover, he took to getting out and about on trams, where he met a young woman named Olive, who was a tram conductor.

Having recovered, Walter was sent back to the front. He saw the war out, and in 1918, back home, he married Olive at Heworth Church and went into business as a butcher in Bootham. Chris came along nine years later.

Chris was called up towards the end of the Second World War. By the time he had completed his training, the war had ended, but he still saw service on a minesweeper, clearing mines from the sea off the French coast.

So he has his own medal, to go alongside his father’s three – including a Mons Star – from the First World War.

Chris and Margaret began collecting sheet music 20 or so years ago, when Chris retired from his job as a maintenance engineer (and latterly messenger) at the Yorkshire Evening Press.

Looking through his wonderful collection of First World War songs in this, the 100th anniversary year of the outbreak of hostilities, brings the days of the ‘Great War’ back to life in haunting, poignant detail.

You get a feel for the sense of duty and of patriotism; but you also feel the longing for home of the soldiers in the trenches, and at the same time the longing for the return of loved ones by those – wives and families – left at home.

Chris doesn’t feel sad, though, when he looks through his collection and sings the old songs.

“But it is history now. My two uncles were killed in the war, but I didn’t know them. It is so far back. Of course, it is poignant. But I can’t get emotional about it, any more than I could about the Boer War.”

It is the wars still going on today that really sadden him, he says.

“When I see what’s going on in Syria, cities smashed to pieces… That’s awful. That upsets me.”