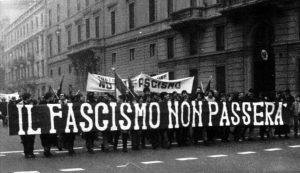 I’m not sure whether this song falls a little too late in history for Radio Days or a little too early. No matter–we like it anyway, and it’s a good time for us to take a short musical holiday from our usual Anglo-American fare.

An Italian folk song of the late 19th century, Bella Ciao has its origins in the hardships of the ‘mondina‘ (seasonal worker) women, the paddy field workers in the Po valley of northern Italy, who sang it as a protest against harsh working conditions in the paddy fields.

But most of you will more likely remember it as an anthem of the Italian partisans during the Italian Civil War between 1943 and 1945 in their struggle against the fascist Italian Social Republic and its Nazi German allies.

So why here and now with Bella Ciao? A few years ago I had the opportunity to meet and to collect oral histories from a group of veterans of the 1943-1945 Italian campaign, the so-called ‘D-Day Dodgers‘ (pictured below), mostly of the British Eighth Army and the British 1st Airborne Division, who fought that struggle between their landings at Taranto, Salerno and Anzio and the mountains at Monte Cassino. 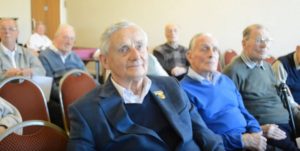 You might like to watch that video, so I append it below.  One of the D-Day Dodgers who did not make it through the war was Eric Fletcher Waters (1914–1944), the father of Pink Floyd co-founder and front-man Roger Waters, who in interview on BBC HARDtalk spoke thus of his father:

I’m so grateful that I carry my father’s genes. My father was a wonderful man. He died very young, he was only 30 years old when he died at Anzio in Italy fighting the Nazis. But he was an extremely interesting man who died absolutely for his principles. He was a conscientious objector at the beginning of the Second World War. And then he worked as an ambulance driver through the Blitz, and he then started doing voluntary work on bomb sites where he met my mother. And together they became interested in politics–they probably both joined the Communist Party either before or around that time–and he eventually decided that his Communism and the need to fight Fascism trumped his Christianity; and so, devout though he was, he went back to the conscription board and said “Excuse me, I’ve changed my mind, I want to go and fight.” “I say, jolly good, you’ve got a degree and everything, haven’t you? Office material. Put this chap down as a …”. And so he did basic training, and then officer training, commission, boom! and killed.

It was as much as anything my watching this and other interviews with Roger Waters that prompted me to plunge back into the war-torn Italy of 1943 to rediscover Bella Ciao, a song that Roger Waters’ father may well have known and, had he known it, would eagerly have sung.

We’d like to share with you some of our favourite recordings of the song.  Hard to choose, there are so many, dozens, hundreds perhaps.  So … the first close to the original, in Italian, with the lyrics included in the video.  My second, in Spanish and a personal favourite of mine, a recording by Diego Moreno.

Our third video is, as mentioned above, my conversations with veterans of the Italian campaign.  Our final video is of Roger Waters on 18th February 2014 unveiling a memorial to his father, Eric Fletcher Waters, in the town of Aprilia, only 20 kilometres north-east of Anzio, in which he was killed exactly seventy years earlier to the day.