When, eighteen months back, we presented ‘The Edwardian Kitchen’ at East Sheen library, I showed a film clip of Gus Elen singing ‘Arf A Pint of Ale.  This had prompted a member of our audience to ask whether it had been Gus Elen who had learned that distinctive walk from Charlie Chaplin, or Chaplin who had learned it from Elen.

I frankly wasn’t sure (there are no early film records), but conjectured that it had been Chaplin who had been inspired by Elen, nearly 30 years his senior.  Chaplin was known to be an admirer of Gus Elen.  As a five-year-old, Chaplin had delighted the audience Canteen Theatre in Aldershot with an impromptu rendering of Gus Elen’s ‘E Don’t Know Where ‘E Are. 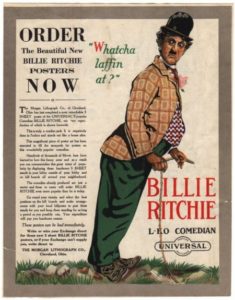 There is certainly a great deal of similarity between Gus Elen’s stage walk and that of Charlie Chaplin.  But they are not identical.  Elen’s is the cocky swagger of the cheeky costermonger; in Chaplin it becomes the gangly gait of the down at heel little man in the ill-fitting suit and shoes.

I’m now confident that the question can be answered.  More than a decade before Chaplin’s rise to fame in Hollywood, the Glaswegian comedian  and music hall star Billie Ritchie (14 September 1878 – 6 July 1921) was strutting the boards with what would come to be recognised as “that Charlie Chaplin walk” (it is claimed that he’d been doing his own ‘tramp’ character on stage since the 1880s).  Between October 1910 and December 1913, Chaplin and Ritchie toured together in the USA, together with Stan Laurel and other emerging stars, as part of Fred Karno’s Fun Factory and Comedy Troupe (previously, from 1897, Fred Karno’s Company of Speechless Comedians) in the show ‘A Night in An English Music Hall’ (and, in Canada, ‘A Night in a London Club’).  Ritchie first appeared in film as ‘The Light-Fingered Tramp’ in a 1914 short titled Partners in Crime and, in the following year, the film below, Almost A Scandal.  Of the ‘tramp’ image, Ritchie told interviewers in 1917:

“I first used my present make-up in my vaudeville act with my three sisters in 1887 […]  Two years later I again used the same make-up in the character of the street musician in ‘Early Birds’ while with the Karno company. I claim that I am the originator of this make-up and of the comedy that is associated with the make-up” (in Motography: The Motion Picture Trade Journal).

5 thoughts on ““That Charlie Chaplin walk””