Radio Days Ltd is pleased to announce the launch of its first concept CD, The Edwardian Kitchen, a compilation of original recordings and contemporary spoken texts around the theme of food and drink.  (You purchase the CD by clicking this link.)

Although his reign lasted a mere nine years from his coronation on 22nd January 1901 until his death on 6th May 1910, it is has become a convention among historians to extend the ‘Edwardian Era’ beyond Edward VII’s death to include the years leading up to the Great War.  We have taken the liberty on this CD, however, to extend the period through to the end of the war.  Our reasons for doing so are very simple: social mores and cultural outlook changed little for ordinary people during the war years, while the music-hall stars who defined popular entertainment during the first decade of the 20th century were largely the same performers who trod the boards in the following decade until Music Hall began to fall into decline with the coming of the Jazz Age, and with the growing popularity of revue and of cinema.

The Edwardians never stopped eating. From the time they rose, to even the times they awoke in the middle of the night, food was ready and available. A typical English breakfast consisted of haddock, kidneys, kedgeree, porridge, game pie, tongue, poached eggs, bacon, chicken and woodcock. Luncheon included hot and cold dishes: cold fowls, lamb, pigeon, cold pie and ptarmigan, puddings, cheeses, biscuits, jellies, and fruit.1

You might be forgiven for thinking that the late Victorians and the Edwardians had something of an obsession with food and drink.

Or at that of Ernie Mayne: Fried Fruit Fritters, I Do Like A Little Bit Of Turkey At Christmas Time, Eggs And Bacon, The Roast Beef Of Old England, My Meatless Day, Sugar, Lloyd George’s Beer, Farmyard On The Brain, What I Want Is A Proper Cup of Coffee, There’s No Toad In the Toad-In-The-Hole, You Can’t Get Many Pimples On A Pound Of Pickled Pork, and No, We Don’t Keep Fish, Only Kippers.

Or Sam Mayo’s Bread and Marmalade.  Or Arthur Lloyd’s The Brewer’s Daughter, Dumplings, Drink Up Boys and Let Us Have Another, American Beef, and Beef, Pork, Mutton.  Or, finally, Gus Elen’s ‘Arf A Pint Of Ale and Don’t Stop My ‘Arf A Pint Of Beer.  And had you heard that Charles Coborn almost started a riot in the Palace Theatre (see the newspaper clipping, right) with his Come Where The Booze Is Cheaper?

The list could go on and on.  But I think you get my drift. 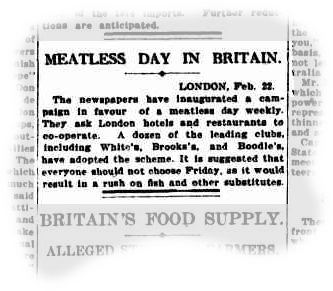 Yes, of course there was a general concern about availability of food during the war years. Imports of foods and nitrate fertilizers were severely curtailed by Germany’s unrestricted U-boat warfare from 1916, and limited food rationing (sugar only) would begin in January 1918.  The British government’s Food Controller, Lord Devonport, urged people to restrict their eating to no more than 4lb of bread or food made from 3lb flour, 2lb 8 oz of meat (including bacon and sausages), and 12 oz of sugar a week.  Ernie Mayne’s songs on this CD humorously capture the malaise felt by the British public as the war dragged on.

And yet most of the songs listed above, and many on the CD, pre-date the beginning of the war.  The fact of the matter is that the Edwardians really did like their food and drink.  The final years of the 19th century saw a renewed interest in cookery, and French cuisine became fashionable (Edward VII loved it!) with the opening of the first public restaurants in the 1880s. Tea shops proliferated and became popular meeting places for ordinary working people, hotels began to offer afternoon tea dances, cars for the wealthier and improved public transport for the less wealthy saw picnics become more popular across all classes. And, of course, cookery books were popular and meals more varied.  Léonard Grünenfelder in his Preface to Cassell’s New Universal Cookery Book writes that

The great development of intercourse between different nations, considerable advances in the methods of preparing and serving food, and the modern tendency to examine into the principles and foundations of things, have not only brought about a large increase of books upon cookery, but perceptible changes in their character.  Of these developments, the present work is an example.

To the first cause we owe it that the art of Cooking has now become to a large extent cosmopolitan.  […] as much of the French cuisine has long become the common property of civilisation, so an intelligent cook is expected to know something of the best dishes from the German, Italian, Indian, and American schools, and does not disdain contributions from even more distant fields. […] Modern Cookery draws both viands and methods from all countries.

But that’s not the only reason for us compiling this CD.  Please read on … 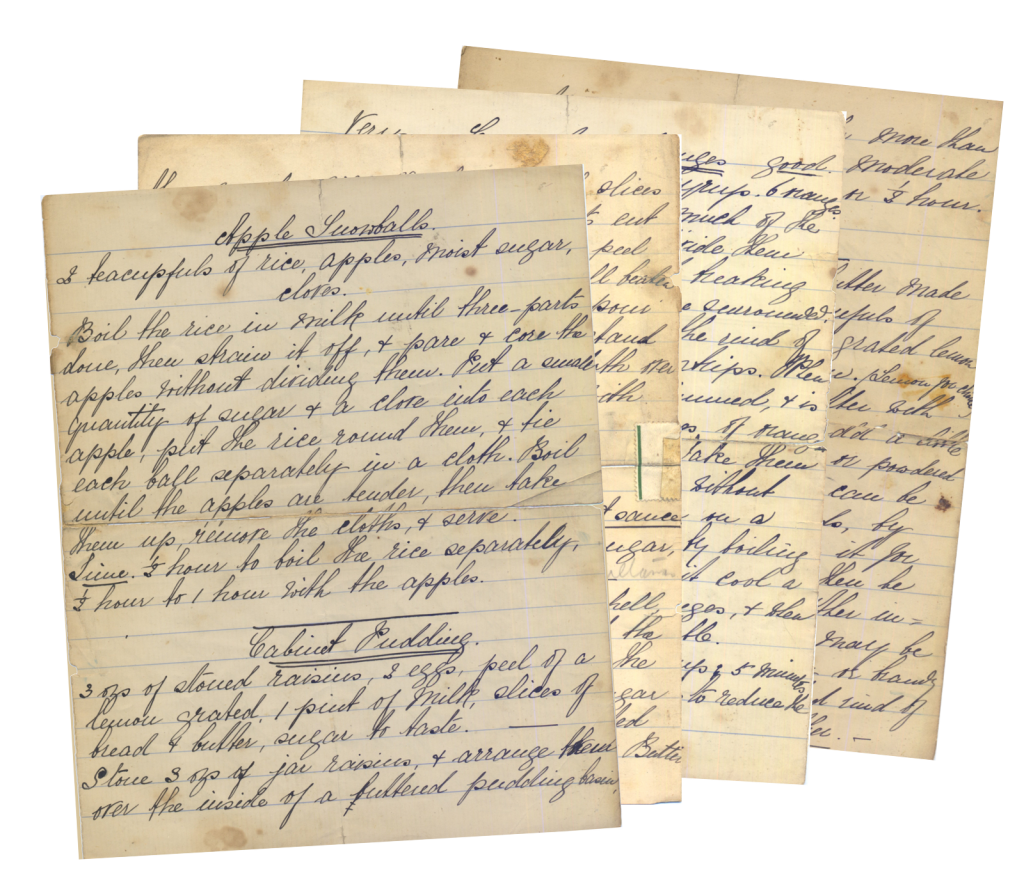 The front cover photograph is of Mary Ann Juden (1856-1931), cook in domestic service to a number of households in London prior to becoming a cook at Putney High School in south-west London in the early years of the 20th century.  She had lived in the East End, where her first child Leonard was born, moved to Walworth in south London where her second child Lilian was born, to the Peabody Buildings in Pimlico where her third child Violet was born.

She never married her children’s father, Daniel Willey, for reasons best captured in Vesta Victoria’s unforgettable song of 1906: “he sent me round a note / Here’s the very note, / This is what he wrote: / “Can’t get away to marry you today, / My wife won’t let me!”  Daniel, you see, was already married to someone else.

Shown on the inside panel of the CD, and on the right of this page, are Mary Ann’s hand-written recipes, among several in the possession today of her great-great-grandson, Christopher, who compiled this CD, designed the sleeve and disc art, and is the voice on the spoken tracks.

The ornate flowery frames to the two remaining panels are by Vanessa Bettencourt, whom we thank for allowing us to use her artwork for this disc.

A Note on the Recordings and the Matter of Copyright

All the recordings on this CD have been digitally restored by our talented sound engineer at Radio Days Ltd using exclusively open source software.  Even the best software in the world, however, can only achieve so much when the original recordings, almost half of them more than 100 years old, are badly scratched and otherwise damaged.  So we’d ask you, the listener, to bear this in mind and to forgive Old Father Time for the less than perfect sound quality on some of these tracks. 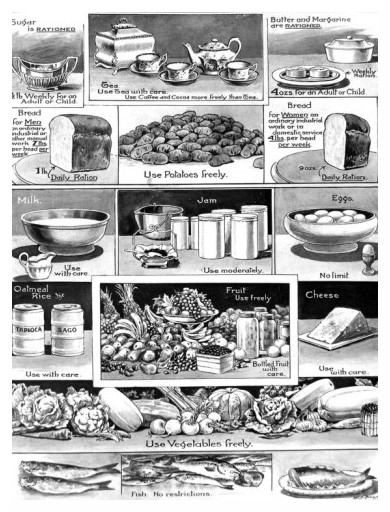 Under the UK 1988 Copyright Designs and Patents Act, copyright in a sound recording expires either (a) 50 years after the recording is made, or (b) if the recording is published during that period then 50 years from the publication, or (c) if during the initial 50 years the recording is played in public or communicated to the public then 50 years from that communication or playing to the public, provided the author of the broadcast is an EEA citizen. Otherwise, the duration under the laws of the country of which the author is a national applies, unless such a duration would be longer than offered in UK law, or would be contrary to treaty obligations of the UK in force on 29 October 1993.  As of November 1, 2013, the copyright on sound recordings not yet in the public domain was extended from 50 to 70 years.

To the best of our knowledge and belief all the material included on this site is therefore in the public domain. The recordings are all old enough (all pre-1920) to be out of copyright; and our research on the rights on the material confirms that the copyright has lapsed.

However, should believe you have a legitimate claim on the performance right of any item on this disc, please contact Radio Days with details of the claim by filling in the form on our Contact page (selecting “I want to discuss a copyright issue” from the pull-down menu). If the claim seems valid, we will remove the item in question from reprints of the CD pending investigations.