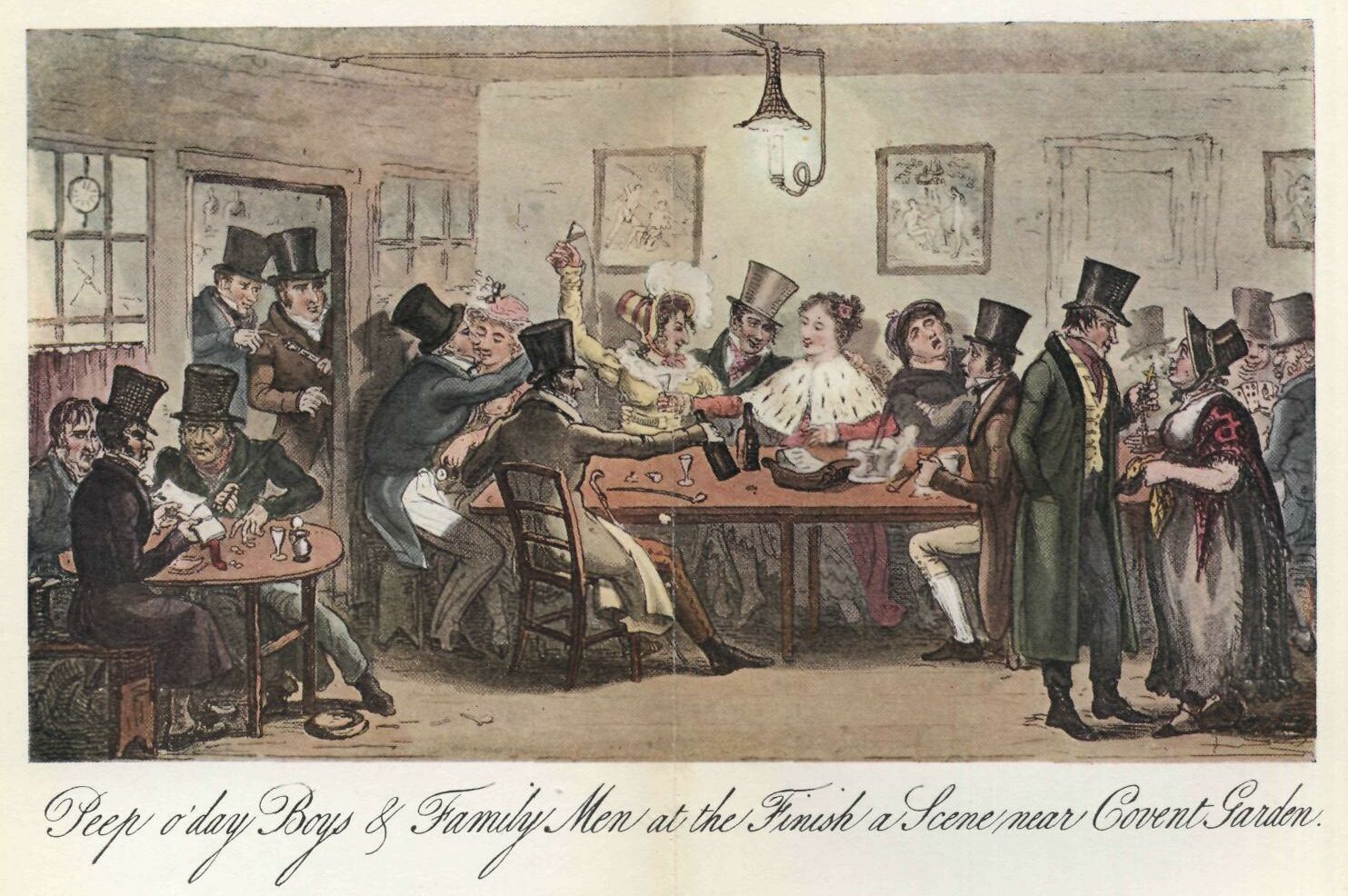 «There are a great number of boys employed in the various workshops on the island, and the diversions of these young gentlemen have a decided tendency to the boisterous, and lean slightly to the predatory. They are great in the performance of intricate shuffles and break-down dances, and are noted for the early acquirement and energetic singing of the popular melody of the hour. A number of the bright particular stars among them, who are known as the Peep o’ Day Boys, levy black mail from those who are trying to sell their goods in the roads near the workshops. “Give us something to leave you alone,” they will say to the proprietor of a stall; and if he is wise he does not refuse.»
Thomas Wright, Some Habits and Customs of the Working Classes. Pp.256-7

I’d first happened upon the Peep o’ Day Boys as scarcely more than a simple mention in The English Spy (1825) by Bernard Blackmantle (pseudonym of Charles Molloy Westmacott) and in Pierce Egan’s Life in London (1821).  Who might they have been?  A quick search of Wikipedia turned up only “an agrarian Protestant association in 18th century Ireland” which, it seemed to me, was unlikely to have any connection with the London gentleman carousing in the illustration, above, from Blackmantle’s book.

The ‘Finish’ mentioned in the legend beneath the picture, by the way, appears to have been a Covent Garden coffee house, previously Carpenter’s Coffee House, established some time around 1762.

There was the “Finish,” -a vulgar, noisy place enough; but stamped with undying gentility by the patronage of his late Royal Highness the Prince of Wales. Great George “finished” in Covent Garden purlieus; Major Hanger told his stories, Captain Morris sang his songs, there. In a peaceable gutter in front of the “Finish,” Richard Brinsley Sheridan, Esq., M.P., lay down overtaken in foreign wines, and told the guardian of the night that his name was Wilberforce. A wild place, that “Finish;” yet a better one thin Great George’s other “Finish” at Windsor, with the actress to read plays to him, the servants anxious for him to quit the stage, that they might sell his frogged, furred coats, and white kid pantaloons: the sorry end in a mean chair-unfriended, unloved, save by hirelings deserted. When the Hope of England is old enough to wear on his fair head the coronal and the three ostrich feathers, will he patronise a “Finish?”
George Augustus Sala, Twice Round the Clock, or The Hours of the Day and Night in London (1859); p.38

Intrigued, and irked at finding nothing, I persisted; and finally found the slightly richer description in Thomas Wright’s book, quoted at the top of this post.  It seemed obvious that they must have been some kind of street gang; a gang that perhaps took its name from the Ulster protestant group, though it is far more likely it would have taken its name from what seems to have been a known drinking establishment:

Of all the clubs,—the Clippers, Screws,
The Fly-by-nights, Four Horse, and Blues,
The Daffy, Snugs, and Peep-o-day,
Tom’s an elect; at all the Hells,
At Bolton-Row, with tip-top swells,
And Tat’s men, deep he’d play.
(from The Oxford Rake’s Progress)

It is possible, I suppose, that the drinking club may, on the other hand, have been named after the street gang:

Bells Life in London and Sporting Chronicle for 2nd August 1857 mentions a “Peep o’ Day Boy” as the name of a racehorse.  But this some thirty-odd years later, indicative of no more than the durability of the name.

And that’s as much as I’ve been able to find.  If any reader of this blog knows more, I should be delighted to hear from you.

Sala, George Augustus. (1859). Twice Round the Clock, or The Hours of the Day and Night in London.  London: Houlston & Wright.
» https://archive.org/stream/twiceroundclocko00sala#page/n5/mode/2up