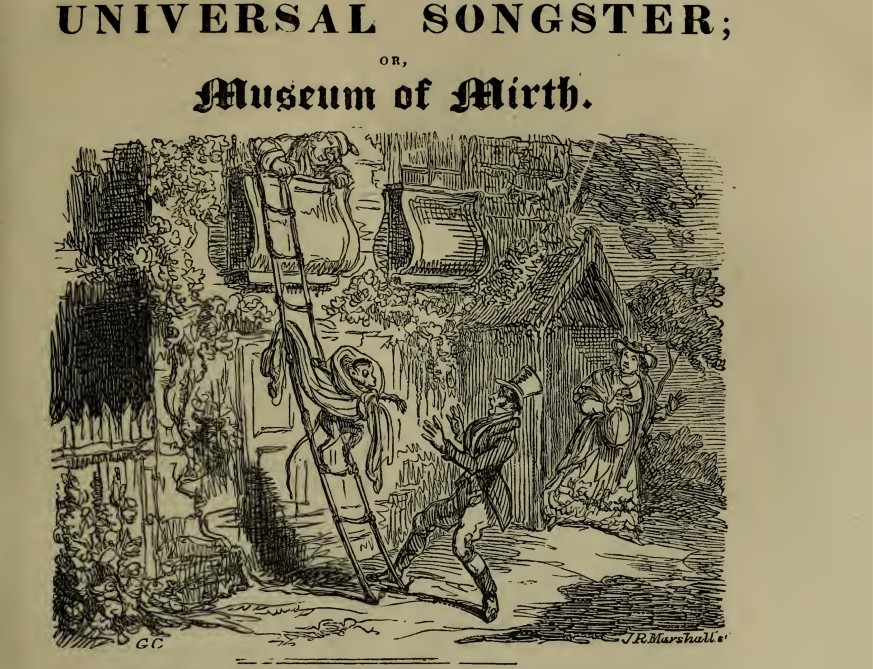 A close contemporary–and friend–of Charles Dickens, caricaturist and illustrator George Cruikshank (1792–1878) is also generally credited, in collaboration with his brother Robert Cruikshank (1789–1856), with the compilation of the three-volume songbook The Universal Songster; or, Museum of Mirth.  The title page in fact does not name an editor or compiler, listing the Cruikshank brothers only as the designers of the volume’s twenty-nine woodcuts, of which the above is an example, and the lyric below:

A FOND youth serenaded his love,
Who, sleeping, — “Love never should sleep!”
Her father was peeping above, —
“O, fathers, you never should peep;” —
To his daughter’s balcony he brought
Her monkey, in muslins arrayed ;
The youth was o’erjoyed, for he thought
‘Twas the form of his beautiful maid.

He gazed on the figure in white,
Whose nods gave new life to his hopes ;
His heart throbbed with love and delight
As he threw up the ladder of ropes ;
His charmer hopped down it, and then
The happy delusion was o’er!
Girls often meet monkey-like men,
But man never wooed monkey before.

From the window, enjoying the joke,
Her father feared danger no more ;
And she, by the bustle awoke,
Soon made her escape at the door!
Come, come to your Rosa, she said,
Unless you prefer my baboon,
And, pray, let your next serenade
Take place at the full of the moon !