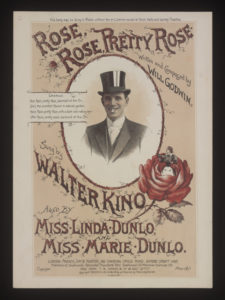 Walter Kino is a music-hall name I don’t come across very often.  Maybe a couple of times this past year, and I can’t now even remember the context. (And though I recall reading that ‘Kino’ was not his real name, I cannot remember what that name is).

But today by chance I happened upon a song of his from 1899, lyrics below, with no vintage recording from that period but a passable rendition (link on bottom of this page) on a folk music site.

The Fellow that Played the Trombone

Now, the other night I took my wife down to a Music Hall.
And ever since that blooming night it has been her downfall.
She sat beside the bandsman, and he filled her with delight,
The fellow that played the trombone, he stole my wife that night.

Now she said she liked his music, she’d go there every week,
I said it would be her downfall if she didn’t stop her cheek,
She took no notice what I said, and when from time to time,
I stayed home and nursed the kids while him and her did shine.

Now the other night I woke and found she’d gone with all her clothes,
She’d gone with that bandsman, to a lind where no-one knows,
But if ever I should find ’em, I’d spoil their honeymoon,
I’d smash his bloody instrument if I catched him playing a tune.