OK, so a title to tease your imagination.  Who the heck, you’re probably wondering, is or was Catherine Crick?

The journey on which we have embarked in search of the roots of music-hall was initiated by our need to prepare for this weekend’s performance at the Milton Keynes Museum Victorian Weekend on the theme of “The Rise and Decline of Music Hall”. And began, almost arbitrarily, with the Cyder Cellars in Maiden Lane as an instance of a ‘song and supper room’.  Who’d have imagined that so simple a quest would have led us on a picaresque journey into inter alia the Minutes of Evidence of London’s Central Criminal Court, and to the case (on page 685) of the stolen spoons, &cet?

For the 23 year old Catherine Crick was a servant girl in the employ of William Rhodes, proprietor of the Cyder Cellars, and brother of John Rhodes, proprietor of the Coal Hole, a song and supper room in Fountain Court, off the Strand.  Found guilty (and guilty she patently was), she was “transported for seven years“.  I’ve found no record of where she would have been transported to, though it would have been to “the colonies” and this would generally be to Australia.  Better than hanging, I suppose. 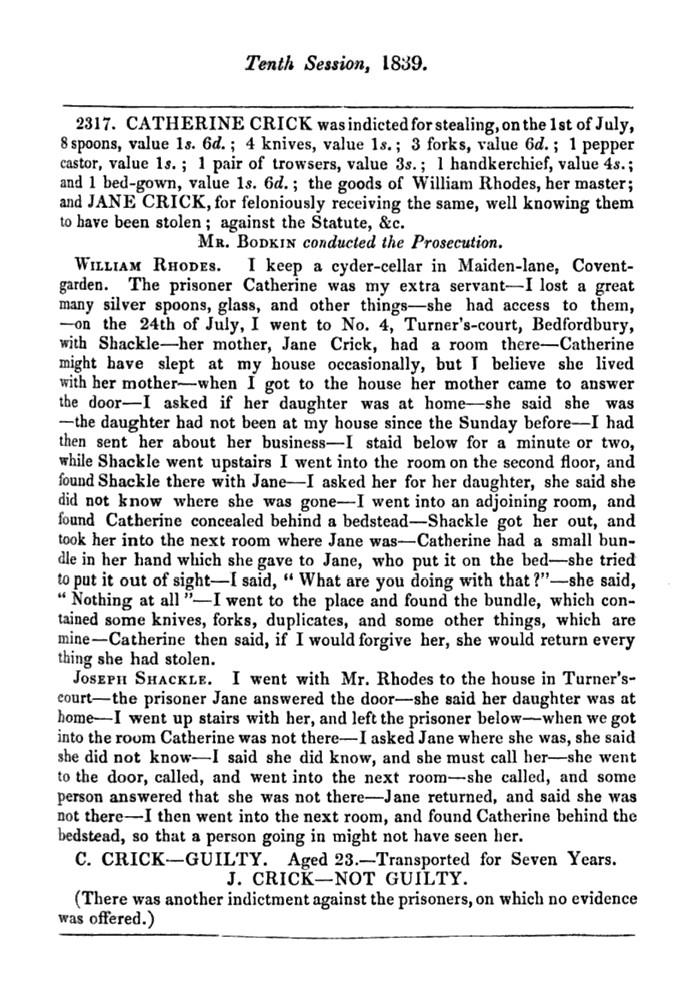 Crick’s is not the only felony recorded at the Cyder Cellars, a certain Joseph Sinclair having been arrested there in 1847:

but that’s another beguilingly Dickensian story; and one that, I fear, would lead us too far astray from our investigation of the roots of Music Hall.

But of course there’s a serious point in our doing (and then publishing) this kind of research: it places the music, the music halls, the audiences, in their historical context.  Radio Days is not about ‘old songs’ but about living history.

4 thoughts on “Whatever happened to Catherine Crick?”