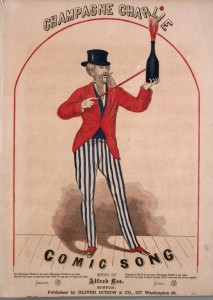 P.J. Proby’s 1964 recording of Hold Me, for example, a 1930s hit for Al Bowlly with the Ray Noble Orchestra, brilliantly remakes a great song for a new generation, while Bing Crosby and Mary Martin’s duet on Lily of Laguna, first performed and later recorded by the excellent Eugene Stratton, I find so excruciatingly bad that I deem it impossible to listen to.

George Leybourne’s 1867 song Champagne Charlie was a success on both sides of the Atlantic.  Tommy Trinder’s recording, below left, made for the highly entertaining 1944 film biopic of George Leybourne and Alfred Vance, is for obvious reasons true to the original.  But in the US the song passed from the Vaudeville stage into popular culture to re-emerge, so changed that little beyond the title remains, in this fabulous 1932 rendition by Blind Blake.