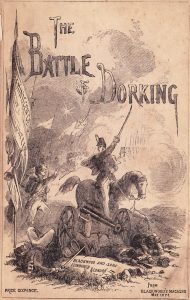 There! I knew the title would grab your attention!  And you’ll get a further sense, as you read on, of why we at Radio Days decided to roll back our time frame to 1870 as the first year, the Year Zero, of our musical narrative of the modern age.

Radio Days has a couple of concerts coming up in November, you see, to commemorate the centenary of the end of the First World War, so I mischievously thought it interesting to explore with our audiences an alternative history of the Great War, one that begins not with Germany’s invasion of Belgium on 4th August 1914, nor with the assassination in Sarajevo of Archduke Franz Ferdinand of Austria on 28th June 1914, but with the unification of the south German states with the North German Confederation into a politically and administratively integrated German Empire on 18 January 1871 in the wake of France’s defeat in the Franco-Prussian War.

Actually, our history of the Great War might be deemed to begin either a few months earlier or a few months later than that day in January, in the first case in the pages of the Edinburgh Review in October 1870 in which prime minister William Ewart Gladstone, writing anonymously, expressed his troubled views with regard to the “new law of nations [that has] censured the aggression of France” with Prussia’s annexation in late September 1870 of Alsace and Lorraine; otherwise, in the second case, in the publication, also anonymously, of The Battle of Dorking in the May 1871 issue of Blackwood’s Magazine.  Let’s put some context to that.  Reaction in Britain to Prussia’s victory had been divided, some having hoped for Britain’s intervention on the side of the French, others of the opinion that “France had properly paid the price for Napoleon III’s arrogance”1.  One thing was certain: Germany was emerging as a formidable scientific, technological, industrial, economic, and military super power, on the verge of becoming the largest economy in Europe and the second-largest in the world, behind only the United States, and the third-largest colonial empire after Britain and France. 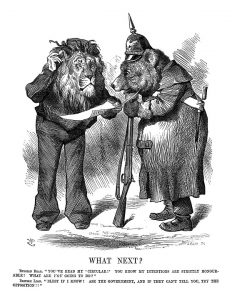 Britain had, since the time of Napoleon, periodically fretted over its small permanent army–the Volunteer Force, a sort of forerunner to the Home Guard established in 1859, hardly compensated for a trained regular army–and now increasingly worried about the ways in which new technologies would change the nature of war,2 and therefore Prussia’s surprise victory was enough to worry some politicians and senior military figures. 3  Gladstone, for example, who had urged the German Chancellor Otto von Bismarck to forbear from annexing Alsace and Lorraine from defeated France, was outraged at Bismarck’s subsequently doing so with no regard for the wishes of its inhabitants, while the Earl of Denbigh, addressing Parliament in a debate on 19th June 1871, worriedly asks his audience to

behold with wonder, not unmixed with awe, the rapid growth of Prussia into a powerful and gigantic Empire, which by its energy and military talent had succeeded within five years in crushing two of the greatest military Powers of Europe and our natural allies, Austria and France … This naturally aroused the attention of England, and compelled her to examine her own forces, and she found to her alarm that she could not properly equip and place in the field more than 500,000 troops, the Regular Army not exceeding 200,000, and the Militia and Volunteers, which raised the complement to 500,000, being more or less undisciplined. … what security had we that the unscrupulous statesmen who ruled with a rod of iron the German Empire would not, when we least expected it and were least prepared, offer studied insult to this country which would oblige us to engage in war?4

But it was a serialised story published anonymously in the previous month in Blackwood’s Magazine, a respected political journal, rival to the Edinburgh Review, and read like its rival by the intellectual and political elite, that was to cause the greatest stir.  At the time of the Franco-Prussian peace negotiations for what eventually would become the Treaty of Frankfurt, the Edinburgh publisher John Blackwood received a letter from the head of the Royal Indian Civil Engineering College, George Tomkyns Chesney (30th April 1830 – 31st March 1895), outlining his idea for a short story about “a successful invasion of England, and the collapse of our power and commerce in consequence”5, its intent to highlight what Chesney perceived to be the lack of preparedness for such an eventuality. Set in the summer of 1875, the Enemy6 had defeated France, annexed Holland and Denmark, and now invaded an ill-prepared Britain. 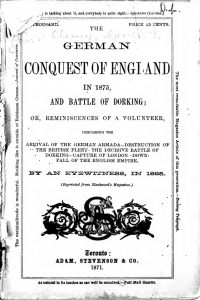 The British fleet caught by surprise and dispersed by “secret engines”, the enemy troops came ashore at Worthing and began moving inland. The Volunteers, ill-trained, ill-prepared, and disorganised, bravely faced the foe but were to be defeated at a battle on the outskirts of Dorking.

The book would spawn many more “invasion” novels in the following years, and might thus be seen as establishing a new literary genre.

Beyond that, one thing was clear: the enemy Britain would now face in the event of a future war would be Germany, not France. Thus it was that as early as March 1881, the French statesman Léon Gambetta and the then-Prince of Wales, Albert Edward, met at the Château de Breteuil to discuss an alliance against Germany. For the competition for industrial, economic, and military supremacy between the nations–and in particular the arms race7 –made that war sooner or later all the more inevitable. As Frederick Engels had presciently written in 1887, “No war is any longer possible for Prussia-Germany except a world war and a world war indeed of an extent and violence hitherto undreamed of. … This is the prospect when the system of mutual outbidding in armaments, taken to the final extreme, at last bears its inevitable fruits”.8

Anonymous (1871). After the Battle of Dorking: Or, What Became of the Invaders. London: George Maddick.

Anonymous (1887). The Battle off Worthing: why the Invaders never got to Dorking. London: The London Literary Society.

Ashley, M. (2014). ‘The fear of invasion’, The British Library
» https://www.bl.uk/romantics-and-victorians/articles/the-fear-of-invasion

Hochschild, A. (2011). To End All Wars: A Story of Protest and Patriotism in the First World War. London: Pan.